The stock market has seen high highs and low lows in 2020. From the days of the March crash to this past week’s record highs when the Dow Jones Industrial Average (DJINDICES:^DJI) surpassed 30,000 points for the first time in its history, investors have been forced to throw away the rule book and look at the market with fresh eyes. Stocks that seemed like surefire winners a year ago have skidded to rock-bottom prices, while companies that looked more speculative (think stay-at-home stocks) have proven to be pandemic stalwarts.

If you’re searching for revolutionary growth stocks to add to your portfolio in the final months of 2020, you’ve come to the right place. Let’s take a look at three companies that have not only flourished in the coronavirus stock market, but are also attractive investment opportunities to hold in your portfolio for the long haul. 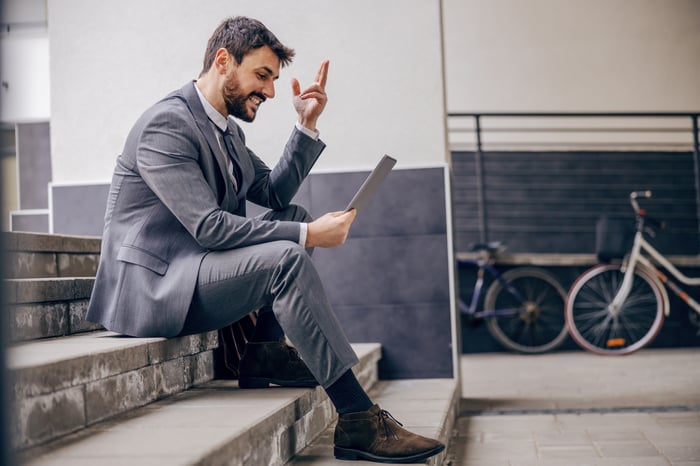 E-contract company DocuSign (NASDAQ:DOCU) has had a banner year, as investors flocked to buy up shares of the company. The stock has gained nearly 200% since January, and is trading more than 210% higher than it was one year ago.

In the second quarter of fiscal 2021 (ending on July 31), the company reported that its revenue was up 45% year over year, while billings had surged 61% from the year-ago period. DocuSign has added a significant amount of cash to its balance sheet in recent months, and closed the second quarter with $91.7 million more in net cash than it recorded in Q2 fiscal 2020. The company’s excellent liabilities to assets ratio — $1.6 billion versus $2.1 billion – is a good sign that DocuSign’s feverish growth streak isn’t costing its business in terms of liquidity.

It’s also important to note that DocuSign was reporting above-average growth before the pandemic. The company grew its revenues 39% year over year in fiscal 2020 and 35% in fiscal 2019. There’s no doubt that the stay-at-home trend has certainly helped to accelerate DocuSign’s growth. But, if its past exceptional performance is any indication, investors shouldn’t worry that the company’s growth trajectory will fade once a COVID-19 vaccine is widely available and more employees return to traditional working environments. In fact, analysts believe that the company will grow its revenues by more than 30% per year over the next five years alone.

Shopify (NYSE:SHOP) was a sound growth play long before lockdown-fueled buying frenzies sent the stock soaring to all-time highs. The company’s revenues grew 59% year over year in 2018 and 47% in 2019.

During the first three quarters of 2020, Shopify’s revenues jumped by double-digits compared to the same periods in 2019. The company reported revenue up 47% year over year in the first quarter, while revenues swelled 97% in Q2 and 96% in the third quarter. Shopify’s merchant solutions business also saw considerable growth during those three quarters at 57%, 148%, and 132%, respectively. Another green flag for Shopify is its cash-to-debt situation. The company had $3.1 billion in cash and cash equivalents and absolutely zero long-term debt on its balance sheet at the end of the third quarter.

Love it or hate it, e-commerce is the future of retail. And while the pandemic may have accelerated this sector’s growth, demand for digital shopping solutions is here to stay. According to eMarketer, e-commerce sales will account for more than 19% of all retail transactions in the U.S. by 2024. As the second-largest e-commerce platform in the U.S. with a 21% market share, Shopify already controls a sizable piece of that pie.

The only real downside to this stock is its price tag. Shopify currently trades for over $1,000 per share and at 660 times trailing earnings. The good news is, if you want to invest in Shopify without shelling out four figures for a single share, fractional investing could be an excellent route for you to add this golden egg to your basket.

Dexcom (NASDAQ:DXCM) has consistently reported double-digit revenue growth this year from its relevant and in-demand products, which include a leading continuous glucose monitoring (CGM) system and diabetes management software. The CGM device market is expected to achieve a valuation of more than $8 billion by 2026. Dexcom is one of the companies situated at the forefront of that market with its flagship product, the G6 CGM system. The G6 CGM device is comprised of a “one-touch applicator” and sensor that “continuously measures glucose levels just beneath the skin and sends data wirelessly to a display device through a transmitter.”

Investors have traditionally liked Dexcom for two key reasons — its consistent revenue increases, and a product portfolio that is less affected by broader fluctuations in the stock market than the average healthcare stock. During the five-year period starting in 2015 and ending in 2019, DexCom reported year-over-year revenue growth figures of 55%, 43%, 25%, 44%, and 43%.

Dexcom certainly hasn’t disappointed investors in 2020, reporting year-over-year revenue increases of 44%, 34%, and 26% during the first three quarters. Gross profits accounted for 68% of the company’s third-quarter sales, and management raised its annual guidance. Dexcom is projecting 29% growth for the full-year 2020, which is lower than in previous years but still excellent considering overall market conditions.

Dexcom’s chief competitor is Abbott Labs (NYSE:ABT), known for its FreeStyle Libre CGM system. One of the most notable differences between the FreeStyle Libre and G6 systems is the sensor’s wear time. Abbott’s device can be worn for up to 14 days, while Dexcom’s has a 10-day wear time. Dexcom is currently gearing up to launch a new and improved CGM system called the G7. In Dexcom’s Q3 2020 earnings call, CEO Kevin Sayer stated that the G7 device would be launched during the second half of next year “as the 10-day product, with a clear pathway to extend the wear duration shortly.”

The company’s G7 platform could narrow its competition with Abbott and other CGM makers. In the meantime, Dexcom’s historical and continued above-average revenue growth despite market headwinds and industry rivalry are compelling reasons to take a second look at this stock.

Peru on Monday almost tripled its official COVID-19 death toll to 180,764, following a government review, making it the country with the worst death...
Read more
USA

INDIANAPOLIS — Police on Friday night named the eight victims, ranging in age from 19 to 74, who were killed when a gunman carried out the country's latest...
Read more
USA

Bengaluru — Roblox is set to join the ranks of the “meme stocks” — stocks driven up by online forums for small investors, causing...
Read more
Economy

The U.S. economy is accelerating again after a coronavirus speed bump at the end of last year, but what’s missing is a big increase...
Read more

Sustainability In Africa: How Rwanda’s Young Innovators Are Building A Circular Economy – Forbes