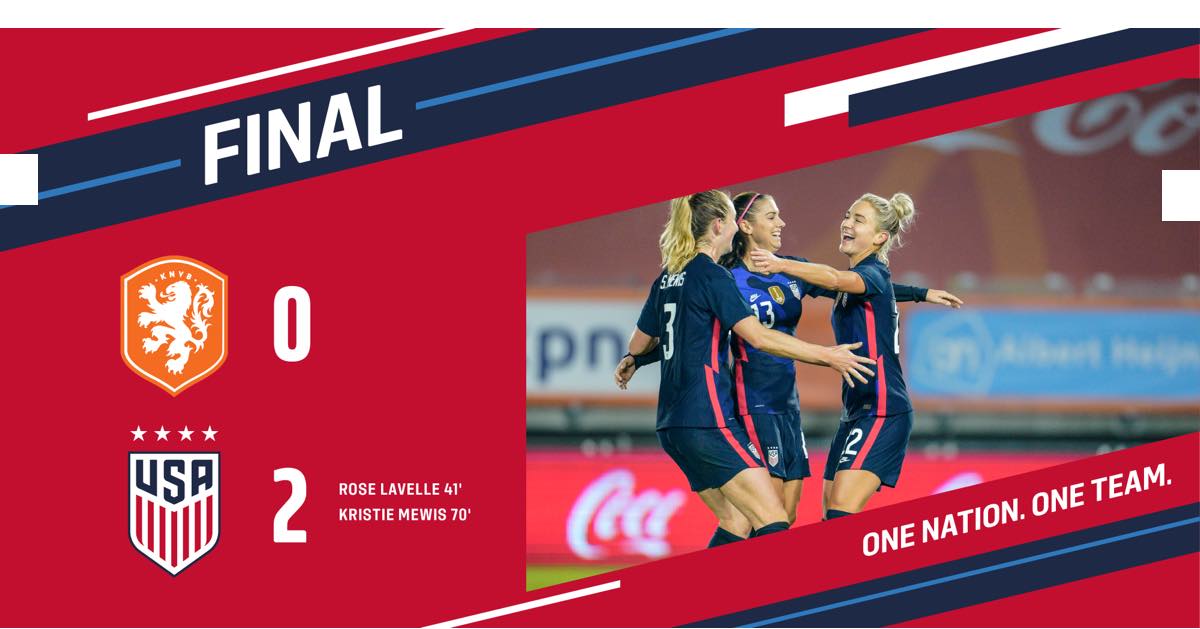 BREDA, Netherlands (Nov. 27, 2020)—The U.S. Women’s National Team defeated the Netherlands 2-0 on a first half goal from midfielder Rose Lavelle and a second half score from midfielder Kristie Mewis to win its first match since March and end its 2020 schedule on a high note. The USA finished 2020 with a record of 9-0-0.

After a number of first half opportunities, the WNT took the lead just before halftime on a soaring strike from Lavelle, who famously scored against the Netherlands in the most recent meeting between the two teams at the 2019 FIFA Women’s World Cup Final in Lyon, France.

Mewis, the older sister of U.S. World Cup star Samantha Mewis, made her first appearance for the USA since 2014 and extended the U.S. lead midway through the second half with a clinical finish with her dangerous left foot. With the victory, U.S. head coach Vlatko Andonovski improved to 11-0-0 in his first 11 games, setting a record for the best start for any head coach in WNT history.

Before the game kicked off, the WNT used their return to action to send an important and unified message, wearing jackets during pre-game that read “Black Lives Matter” on the front.

Andonovski named nine players to the starting XI who also started the 2019 World Cup Final. The two changes — forwards Christen Press and Lynn Williams — made their presence known on the front line, creating some of the USA’s best chances during the first half. Williams fired several shots attacking from the right wing while Press appeared to have the game’s opening goal off of a lovely pass from Tobin Heath, but the play was whistled offside. The U.S. took far greater initiative on the attack in the opening frame with the American’s aggressive defensive press giving the Dutch fits. The Americans out-shot the Netherlands 12-0 in the first half 14-2 for the match. The Dutch did not get off a shot until late in the match.

The USWNT’s breakthrough came in the 41st minute as Press found Lavelle streaking down the right wing. The midfielder evaded a Dutch defender to the inside with a nifty dribble and then ripped a rocket from the corner of the box, sending it into the top left corner of the goal.

Mewis returned to the field for the WNT after an even longer lay-off, making her first appearance for the USA since March 10, 2014. When she took the field with her younger sister Samantha, it was the third time the sisters had played together for the USWNT, breaking the tie with the Fair sisters, Lorrie and Ronnie, who played together twice in the late 1990s.

The insurance goal came in the 71st minute off a long free kick from U.S. goalkeeper Alyssa Naeher. The ball skimmed off the head of a Dutch defender and skipped to Williams, whose one touch pass found Mewis splitting two Dutch defenders on the run into the left side of the penalty area. The elder Mewis then lashed her left footed shot across the goal and into the lower right corner of the net. Her second career international goal came 2,722 days after her first on June 15, 2013, the longest span between goals in WNT history.

History was made again in the 75th minute, when 20-year-old forward Sophia Smith entered the match and became the first player born in the 2000s to earn a USWNT cap. Her former youth club teammate at Real Colorado, 21-year-old Jaelin Howell, also earned her WNT debut when she entered the match in the 89th minute. The pair of Coloradan natives became the first players born after the 1999 FIFA Women’s World Cup to appear for the USA.

Morgan almost added an exclamation point in the 90th minute, but her late effort was whistled offside. The U.S. defense held stout down the stretch, squashing any dangerous Dutch entries into the final third. Naeher didn’t have to make a save while keeping a clean sheet, her seventh of the year. The USA has allowed just one goal through its nine matches in 2020.

USA – Rose Lavelle (Christen Press), 41st minute: After a number of opportunities down the stretch, the WNT finally found the back of the net just before the break. Christen Press intercepted a Dutch pass in the U.S. half and then went off to the races on a counterattack, streaking downfield with Rose Lavelle on the right flank. Press threaded a pass through two Dutch defenders for Lavelle, who took a few touches to evade a defender before firing a left-footed shot from the right corner of the 18-yard-box into top left corner of the net, giving 2019 Women’s World Cup Golden Glove winner Sari van Veenendaal no chance. USA 1, NED 0

USA – Kristie Mewis (Lynn Williams), 71st minute: A long ball from Alyssa Naeher deflected off a Dutch player to the feet of Lynn Williams, who one-touched it forward to find Mewis on the move towards goal. She outran her defender, and before another Dutch defender could slide in, the midfielder ripped a hard-rolling shot to the far post past the outstretched goalkeeper. USA 2, NED 0

Attendance: No Fans Allow in Stadium

Tottenham are interested in signing Fiorentina striker Dusan Vlahovic. The Serbia international, 21, is one of a number of strikers the Premier League club...
Read more

Stock futures were flat to slightly weaker on Sunday evening, as investors weighed new COVID-19 infections — which are leading to rising deaths and...
Read more

Russia warns its economy is showing signs of overheating – CNBC

Getting ‘crushed’ on Melbourne’s path to coronavirus success – BBC News

"I think you'll see the real fallout in March, April and May next year. That will be when you get a real understanding of...
Read more
Sports