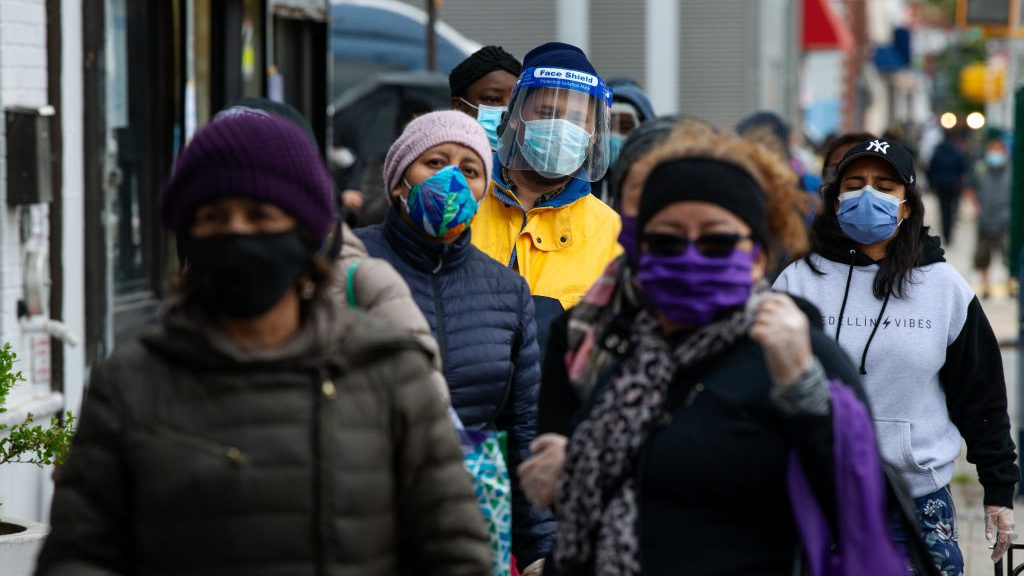 From e-commerce to telework, the pandemic is accelerating economic trends by decades, according to Scott Galloway at the New York University Stern School of Business. In his book, “Post Corona: From Crisis to Opportunity,” Galloway maps out how in only a few months, policy decisions responding to the pandemic and the disease itself are pushing the economy forward — for better or worse. The following is an excerpt from Galloway’s book. To hear his interview with “Marketplace” host Kai Ryssdal, use the media player above.

In Crisis There Is Opportunity

It’s a cliché for a reason. John F. Kennedy made it a staple of his campaign speeches. Al Gore used it in his Nobel Prize acceptance speech. The Chinese word for crisis consists of two symbols, one meaning danger, the other, we are told, meaning opportunity. What opportunities await us post corona?

The pandemic has a silver lining that could rival the size of the cloud. America overnight has a greater savings rate and fewer emissions. Three of the largest, and important, consumer categories in the U.S. (healthcare, education, and grocery) are in a state of unprecedented disruption and, possibly, progress.

While the overwhelming of some hospitals due to Covid-19 was rightfully the lead story, the more lasting narrative may be how the other 99% of people accessed healthcare during the pandemic—without setting foot in a doctor’s office, much less a hospital. The forced embrace of telemedicine promises an explosion in innovation and opens a new front in the war against the costs and burdens of our broken healthcare system. Similarly, the forced embrace of remote learning, as clunky and problematic as it has been, could catalyze the evolution of higher education, yielding lower costs and increased admittance rates, and restoring college to its role as the lubricant for Americans’ upward mobility. Even more fundamental than education, nutrition stands on the precipice of revolution, if the dispersion of grocery via delivery creates opportunities for more efficient distribution, wider reach for fresh foods, and adoption of local goods.

Underneath these changes, coming of age in a worldwide crisis has the potential to mature a generation with a renewed appreciation for community, cooperation, and sacrifice—a generation that believes empathy is not weakness, and wealth isn’t virtue.

Opportunities are not guarantees. Indeed, the popular story about the Chinese word for crisis is not quite right. The first character means danger, but the second character is better translated as a critical juncture. A crossroads. For Lenin’s countrymen, the radical transformations of 1917 presented opportunities as well. Their failure to seize them led to immense suffering.

It’s easy to believe that won’t happen to us, that “it can’t happen here.” But consider that not long ago (middle of the 20th century), we put 75,000 American citizens behind barbed wire because they had Japanese ancestry. Consider that none of us, at the onset of the pandemic, thought the U.S. could be a country that lost a thousand people a day to a virus that other (less developed?) nations stopped in its tracks.

Our response to this crisis has not inspired confidence. Despite having longer to prepare, spending more on healthcare than any nation, and believing we are the most innovative society in history, with 5% of the world’s population the U.S. has endured 25% of the infections and deaths. It took the last 10 years to create 20 million jobs and 10 weeks to destroy 40 million. Travel is down, restaurants are dark, drinking and handgun sales are up. Over 2 million Gen Zers have moved back in with their parents, and 75 million young people are going to school amidst uncertainty, conflict, and danger.

Historians can dissect the missteps that led us here. The deeper cause of our failure is already clear.

Consider two wars. America’s involvement in World War II lasted 3 years and 8 months, and 407,000 Americans perished. You couldn’t find chocolate or nylons, and despite the financial stress of wartime, households were asked to dig into their pockets and buy war bonds. Manufacturers retooled their plants to build bombers and tanks, and a nationwide 35 miles per hour “Victory” speed limit was imposed to save fuel and rubber for the war effort. We drafted high school students and high school teachers, and they gave their lives for liberty. After the war, we invested in our enemies and produced more wealth and prosperity than any society to date. For a time, we distributed it more fairly than ever before. We changed where we lived (suburbs) and how we lived (the car and television), and began a long-overdue reckoning with our most profound inequalities of race and gender.

American forces have been fighting in Afghanistan for 19 years, and we’ve lost 2,312 service members. The conflict has metastasized into violence spanning the globe, with civilian deaths in the untold (literally) hundreds of thousands. During that time, I have seen numerous 14-mile-per-gallon SUVs with “Support Our Troops” bumper stickers, but I’ve had no trouble finding chocolate, or anything else I might desire, at the store or on my phone. The more money I make, the lower my tax rate, and nobody has asked me to buy a war bond or take a draft number. Instead, we have outsourced the war to a volunteer army of working-class young people, financed by future generations via a $6.5 trillion increase in the deficit.

Patriotism used to be sacrifice, now it’s stimulus. In the pandemic, our nation and its leaders have spoken with their actions: millions of American deaths would be bad, but a decline in the NASDAQ would be tragic. The result has been disproportionate suffering. Lower-income Americans and people of color are more likely to be infected and face twice the risk of serious illness than people from higher-income households. For the wealthy, time with family, Netflix, savings, and stock portfolio value have all increased as commutes and costs have declined.

Whether the U.S. is headed for a Hunger Games future or something brighter depends on which path we choose post corona.

This website uses cookies so that we can provide you with the best user experience possible. Cookie information is stored in your browser and...
Read more
Stock

Look who’s back. After a long absence, active individual investors have returned with a vengeance. And while that may literally be true to some...
Read more
Economy

With the Economy on the Ropes, Hungary Goes All In on Mass Vaccination – The New York Times

Six English clubs which sparked uproar by secretly agreeing to play in a European Super League are braced for showdown talks with the Premier...
Read more
European Premier League

What’s the Best Cryptocurrency Stock? It Might Be CME Group – The Motley Fool

2020 was a seeming conundrum in financial markets. In the midst of the pandemic, many investors turned a tidy profit. In particular, owners of...
Read more

Nothing drags down a market like uncertainty. So on Monday, as clarity emerged around two of the year’s most pressing concerns — the presidential...
Read more
Cryptocurrencies

Paris, March 17, 2021 -Governments might look askance at bitcoin, but it does not mean they do not want to cash in on its...
Read more
Business