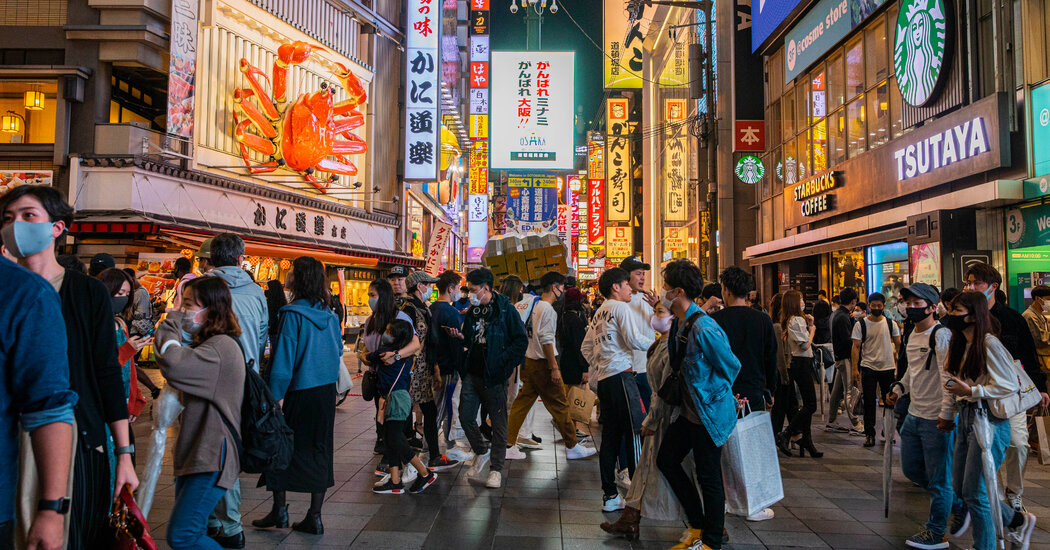 TOKYO — Japan became the latest major economy to bounce back from the devastation of the coronavirus, as lockdowns eased and pent-up demand led to surging domestic consumption and a rebound in exports.

But the recovery is unlikely to be long-lived, analysts warn, as a surge in new virus cases has led to a second round of lockdowns in the United States and Europe and threatens to dampen sentiment at home.

Japan’s economy, the world’s third largest, surged 5 percent during the July-to-September period, for an annualized growth rate of 21.4 percent, after three straight quarters of contraction. The performance follows spurts of growth in the United States and China, the No. 1 and 2 global economies, after the initial hits caused by the pandemic, in a hopeful sign for global growth prospects.

Japan’s economy had contracted a revised 8.2 percent last quarter as the pandemic kept consumers home and devastated already weak demand for the country’s exports. The collapse in growth was the largest since 1955, when the Japanese government began to use gross domestic product as a measure of its economy, and paralleled similarly disastrous numbers for most of the world’s major economies.

While the country appears to be on the road to recovery, severe economic damage remains, according to Yuichi Kodama, chief economist at the Meiji Yasuda Research Institute.

“The rate of expansion is high, but the real economy is not as good as the numbers. It’s only about halfway recovered from its enormous fall,” he said.

When the pandemic hit in February, Japan’s economy had already begun to shrink because of slumping demand from China, a tax increase on Japan’s consumers and a costly typhoon in October. That underlying weakness made it the first among major economies to fall into recession, defined by two consecutive quarters of contraction.

That same fragility has also made it slower to recover. The size of its rebound has not been as stark as other major economies. The United States economy grew 33 percent, on an annual basis, in the most recent quarter.

Japan declared a national emergency in mid-April, asking people to stay home and businesses to close, but by early summer case numbers had dropped to a few hundred a day nationwide, and life returned to something approaching normal, despite a bump in July.

Large government subsidies kept workers in their jobs and companies in business. To stimulate the service sector, authorities provided discounts for those willing to travel and eat out. Diners returned to restaurants and shoppers returned to malls. By October, moviegoers were flocking to the theaters.

Japan’s success in controlling the virus so far — it has recorded around 1,800 deaths since the pandemic began — has made businesses and investors bullish. Economic sentiment in the service sector is at its highest point in six years, according to a monthly government survey. And the country’s main stock exchange, the Nikkei, hit a 29-year high last week.

But it may be difficult to maintain the recovery’s momentum as the virus spreads in the winter months. Although daily case counts in Japan have yet to pass the 2,000 mark, the numbers have grown steadily in recent weeks.

As case counts grow, government efforts to stimulate the economy through discounts on travel and dining out have come under fire, with many questioning the wisdom of encouraging people to move around during the pandemic.

While the government has said it will exercise increased vigilance, Prime Minister Yoshihide Suga has continued to support the program, saying that there is, as of now, no need to consider a new state of emergency.

But “things could change a lot depending on what happens with the coronavirus,” said Yoshiki Shinke, chief economist at the Dai-ichi Life Research Institute. The recovery would most likely stall if the government calls for new restrictions on activities as it seeks to curb new cases, he said, adding “as of right now, all you can say is that there is a lot of uncertainty.”

The bigger immediate threat to growth, however, may be an explosion in virus cases in other countries, said Akane Yamaguchi, an economist at the Daiwa Institute of Research.

The recovery “depends on overseas economies,” she said. “There is downside risk as Europe locks down, and in the United States if the president tightens prevention policies as infections increase.”

Regardless of what happens abroad, Japan’s economy may take a long time to fully recover.

While China’s return to growth will help, “Japan’s economy can’t rely on external demand alone to pull it into economic recovery,” Mr. Kodama of the Meiji Yasuda Research Institute said.

While a vaccine could spur a rapid recovery, he said, without one, “Japan’s economy will continue to be sluggish, tending toward stagnation, through next year.”

WASHINGTON (AP) — LaTonya Story is every retailer’s worst fear.With the viral pandemic re-surging through the country and the economy under threat, Story has...
Read more
Cryptocurrencies

Bitcoin plummets by the most since March as a stronger dollar and investor nerves strip off nearly $140 b.. – Business Insider

A photo illustration of cryptocurrency tokens. Yuriko Nakao/Getty Images Bitcoin slid as much as 21% over Sunday and Monday, its biggest two-day decline...
Read more
Economy

NEW YORK, April 7, 2021 /PRNewswire/ -- Against all odds and after weeks of planning, "Operation Zion" was launched as an El Al Boeing 787...
Read more
World News

Instead, it's looking at Taiwan's surrounding waters for solutions, planning to build more seawater desalination plants. Most are located in outlying islands, with only...
Read more

Ethereum and Ripple are exploding higher thanks to the growing interest in cryptocurrencies that lifted B.. – Business Insider

The reverberations throughout sports came swiftly after a jury in Minnesota convicted Derek Chauvin on Tuesday of murdering George Floyd, as athletes, teams and...
Read more

The S&P 500 continued its surge to new all-time highs last week as big banks kicked off what analysts expect to be an impressive...
Read more
Sports

Why Fox Sports Southwest is now Bally Sports, and where you can (and can’t) watch Texas Rangers games – The Dallas Morning News

Hoping to watch this season’s Texas Rangers on YouTube TV, Hulu or another TV streaming service?Unfortunately for fans, the options are slim for tuning...
Read more
Sports