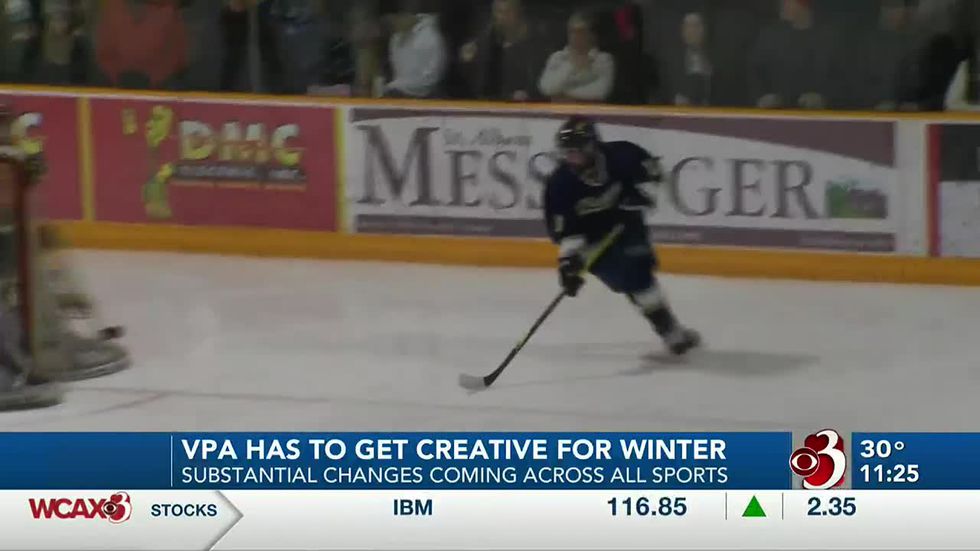 BURLINGTON, Vt. (WCAX) – With the short but complete Fall sports season in the rearview, the high schools are now looking ahead to the VPA’s busiest season. Traditionally, the VPA sponsors 11 sports in the Winter months, but that number will drop to 9 after the state of Vermont decided not to allow wrestling or indoor track this year.

“Right away when you talk about wrestling, you just can’t get away from the fundamental skin to skin contact,” said Bob Johnson, Associate Executive Director of the VPA. “The problem you have with indoor track is exactly that, it’s indoors. We did all of our indoor track meets at college facilities. We don’t have access to any of the state colleges or the University of Vermont, and those meets were fairly large, you could have anywhere from 200 to 400 students show up for a meet.”

Of course the logic Johnson is offering is sound, but it’s still been really tough to tell the people involved with those sports they can’t play while everyone else can.

“The first response you get is the emotional response from people,” Johnson said. “You’re denying those kids the ability to wrestle. But especially for those kids that are seniors and would have been coming into their final year, that’s huge. Ok, but then you start talking about the realities, you know and the reality is that COVID-19 is still around. And I think people understand that, they feel bad about what is happening to their student.”

But there are still some serious questions about the sports that they are planning to play this Winter, namely from a facilities perspective. Both basketball and hockey traditionally use area college facilities at playoff time.

“We have to be convinced that we can do it and do it safely,” Johnson said. “And whether that means we’re gonna end up playing games at higher seeds or neutral seeds or wherever, who knows. You know the ice hockey facilities, that’s a conversation we’ve gotta have with each facility and be able to say that we need to have this happen. There’s no spectators this year. That will make a big difference.”

You heard him. No spectators at indoor events. That has caused some backlash.

“Not everyone’s getting in line,” Johnson lamented. “I mean people are very upset about having no spectators. You know when you tell a mother or a father that they can’t watch their son or daughter play at an event, I mean they’re not happy, and I understand that. There’s just, there’s no other option.”

Johnson says that many schools either have already increased their internet video streaming capabilities or are looking into that to allow parents and fans to watch the games…but two other Winter sports theoretically could end up using that technology for their actual competitions.

“We’re beginning to have that conversation, we’ve had that at least with dance,” he said. “Cheerleading will be meeting I think it’s on November 20th and that’ll be part of a topic of conversation with them too. We don’t know the answers to those two yet but we have talked a little bit about things such as virtual meets and virtual championships.”

So far bowling and gymnastics, the other sports with several schools converging inside, are likely to go on as normal with enhanced sanitation measures. As for the mass gathering outdoor sports like skiing and snowboarding, the VPA might have to get a little creative with their facilities again.

“Obviously the facilities already have a set of criteria that have been given to them by the state of Vermont and we’ll have to meet that,” he said. “Now it may mean that we go to a place that doesn’t have the base lodge open and so we have to find a way to work with that.”

And the one change that is affecting every sport is the delay. Teams are allowed to begin practicing on November 30th, but competition is barred until January 11th at the earliest. That would make for another very short season with championships typically running from mid-February to mid-March. But Johnson says Vermont’s climate allows for a way around that.

“We’re gonna extend the season,” Johnson said. “How long we’re going to extend it, we don’t know yet. I mean we have a little bit of time because the reality is when you start the Spring season in late March, you’re really not starting the Spring season yet because you’re not going to be out on your baseball field.”

Johnson doesn’t anticipate the Spring season will look all that different from usual, but that’s something to take a look at after we get through what promises to be a strange Winter.

The World Is Never Going Back to Normal – The Atlantic

After a string of postponed games and dozens of players going into self-isolation and with a new, more infectious strain of the virus on...
Read more
Sports

Oppenheimer Says These 2 Stocks Could Spike Over 100% – Yahoo Finance

Markets have been turning mostly up since the election, as investors have taken the measure of the macro environment and appear pleased. There is...
Read more
USA

The Powerball lottery is a lottery in America that is conducted in 45 states. This lottery takes place every Wednesday and Saturday and is...
Read more
Cryptocurrencies

Cryptocurrency investors could ‘lose all their money,’ UK regulator warns as Bitcoin price drops from all.. – Business Insider

Dado Ruvic/Reuters People could "lose all their money" if they invest in cryptocurrencies such as Bitcoin, the UK's financial watchdog said on...
Read more

Yemen is the locus of the world’s worst humanitarian crisis, leaving 80% of the population in need of humanitarian help. Schools, factories and hospitals have...
Read more
World News

On Thursday, Prime Minister Jacinda Ardern announced that the lockdown would end as planned at midnight, even though three more locally transmitted cases have...
Read more
World News

April 12, 2021During a Deep Dive segment of Medical World News®, CancerNetwork® sat down with Maurie Markman, MD, to discuss how lessons learned from...
Read more

WASHINGTON - Car hijacking is a horrible scourge that South Africans are unfortunately all too familiar with, but it’s not something that one would...
Read more
World News

For a man presenting landmark results from trials of a vaccine that it is hoped will save the world from a devastating pandemic, Sir...
Read more
USA