North Huntsville is open for business.

And the North Huntsville Business Association has opened an office and business center to help entrepreneurs and small business owners find success. 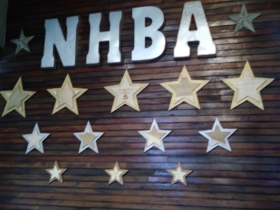 “It’s important we not only identify businesses we can help, but it’s also about redevelopment and what businesses’ needs are,” said NHBA Executive Director Judy Hardin. With some 30 years of experience working with small businesses, Hardin recently retired from Raytheon as manager of Small Business Partnering. “We are here to support them, finding the means for them and collaborating.

“As businesses grow, the community will grow.”

One of the means is a Google Fiber-supported Promote the Parkway Initiative. The program aims to assist the city in attracting business along the North Memorial Parkway corridor. It includes one year of free rent to a start-up small business in North Huntsville.

Keith, who is opening the North Side Dark coffee shop in the shopping center, has been working to get needed help – financial and advisory – for the North Memorial Parkway corridor.

“This is the first example of seed money from the city,” he said. “We have to keep the public and private partnerships.

“You can’t get the location and right of way the way North Huntsville has it.”

“We want to see that the inclusion is a reality,” she said. “The importance of inclusion and diversity is a benefit to all.”

Jimmar echoed Hall’s remarks on diversity and inclusion … and added another aspect.

“As a Chamber, we’re here for you,” she said. “It’s about diversity, inclusion and equity.”

Keith credited NHBA President Reggie McKenzie with being instrumental in promoting North Memorial Parkway and the need for redevelopment and opportunities for small businesses and entrepreneurs.

“This has been a real inspiration for the community to see there is an opportunity for entrepreneurs,” said NHBA Vice President Alex Adams. “This is a star for Huntsville, particularly the north side of town.”

For more information on the North Huntsville Business Association and the Promote the Parkway Initiative, visit http://northhuntsvillebusiness.com/.

Business 101: What we can learn from female business owners – IOL

USATSI When Tyreek Hill showed up to the Super Bowl last year, he casually mentioned the fact that he might try...
Read more
Sports

10:21 AM ETThere maybe never has been and there may never be again a year like in sports like the one 2020 gave us....
Read more
Cryptocurrencies

PayPal will now let all users in the US buy, sell, and hold cryptocurrencies right from their PayPal account. The news came in an...
Read more

There have been mixed reports about how the Eagles' players felt about the team's decision to bench Jalen Hurts for Nate Sudfeld during their...
Read more
Sports

Review of St. Pauli: Another Football Is Possible, by Carles Viñas and Natxo Parra. (Pluto Press, 2020). In...
Read more
Economy

NEW DELHI — China has come roaring back from the devastation of Covid-19, and the United States, Europe and Japan are finding their feet....
Read more

The Nasdaq Composite tumbled Wednesday as investors retreated from many of the technology companies that have powered markets higher this year. The technology-heavy index...
Read more
Cryptocurrencies

The PayPal application on an Apple iPhone. Andrew Harrer | Bloomberg | Getty ImagesPayPal on Wednesday announced a new feature that will allow users to...
Read more
USA

The world's COVID-19 vaccine makers are rapidly ramping up production and expressed optimism Tuesday that the U.S. will have sufficient supply to vaccinate every American...
Read more

NASHVILLE, Tenn. – A tip, a hat and a pair of gloves provided all the evidence authorities needed to identify the remains of a man...
Read more
Sports

Cricket is in line to receive a significant chunk of a £300million summer sports recovery package that the Chancellor is expected to announce...
Read more