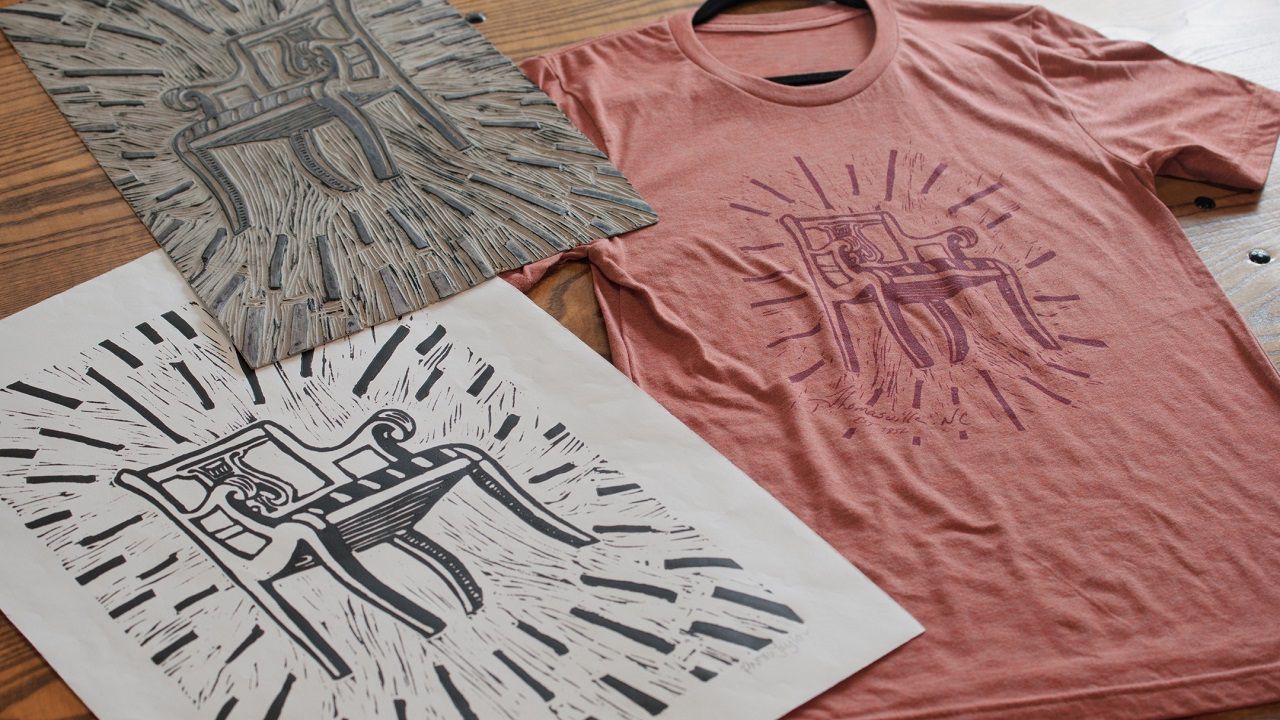 THOMASVILLE, N.C. — A family business is creating T-shirts and other apparel to promote pride for small hometowns across the state.

Paxton Taylor is the brains behind her family’s business, Taylor’d Threads. Taylor went to school at High Point University, where she majored in graphic design. In school, Taylor would create designs that she’d never expected to one day end up on her own apparel.

“It’s fun to take things that I’ve done in the past and kind of give it new life again or give it a whole new meaning,” Taylor says.

One of the designs she made in college was of a big chair, which ended up being the logo for the business. It was an idea inspired by her hometown, Thomasville, which is commonly referred to as “Chair City.” There is a 30-foot landmark replica of this chair that rests in the middle of the city that was erected in 1950.

The original “big chair,” was constructed by Thomasville Furniture Industries, which closed in 2014. Taylor says it left a lot of people jobless and has left a bad impression for some, but she wanted to bring some positivity to the symbol and its history.

“Coming up with the design of the simple big chair, it just shows how even the new age, new generations can love this history even if they weren’t born in the time when we had these industries, it capsulizes what we are,” Taylor says.

Taylor likes to keep most of what she does locally, reinforcing the idea of loving your hometown. She uses a print shop in town called Winner’s Circle, to help Thomasville’s economy.

“Why not do things in your own little town, those are the ones that actually matter and make a difference?” Taylor says.

Taylor started off designing shirts just for Thomasville, but as the business gained popularity, she decided to start making apparel for the state of North Carolina, Lexington, and High Point. Her plans are to expand and do more.

“There’s so many towns in America that are loved, like the ‘I Love New York’ slogan that everybody knows about, you know you want to give that same feeling to your own town, because if you’re going to stay here, you should make the most out of it,” Taylor adds.

Bringing pride to small hometowns is what its all about, and now that there are talks of creating a storefront for the business, there is a little extra something to be proud of.

The global rollout of coronavirus vaccines was never going to be easy. But it quickly descended into frustration at home and nationalistic acrimony abroad...
Read more
World News

10:37 AM ETAssociated Press NEW YORK -- With a crisp white graphic look and roomy pockets, the uniforms to be worn by Team USA...
Read more

University of California, Davis, sources are available for comment on a variety of aspects related to poverty and its effects. Sources listed here can...
Read more
Economy

Want to get The Morning by email? Here’s the sign-up.Good morning. Why has the U.S. economy fared so much better under Democratic presidents than...
Read more
World News

We’ll now be closing this live blog. Thank you all for following along with me tonight! We’ll be starting a new live blog...
Read more

The S&P 500 rose to an all-time high on Thursday as investors shrugged off a key inflation report that showed a bigger-than-expected increase in...
Read more
Sports

Following their humiliating defeat against Chelsea in both legs, Spanish giants Atletico Madrid were knocked out of the Champions League. Thus, Real Madrid remain...
Read more

Man United, Liverpool, Real Madrid: Who is the best club in Europe? – GIVEMESPORT

Liverpool have stuttered in the Premier League in recent weeks while Manchester City have undergone something of a resurgence.  Pep Guardiola's side have been uncharacteristically...
Read more
World News