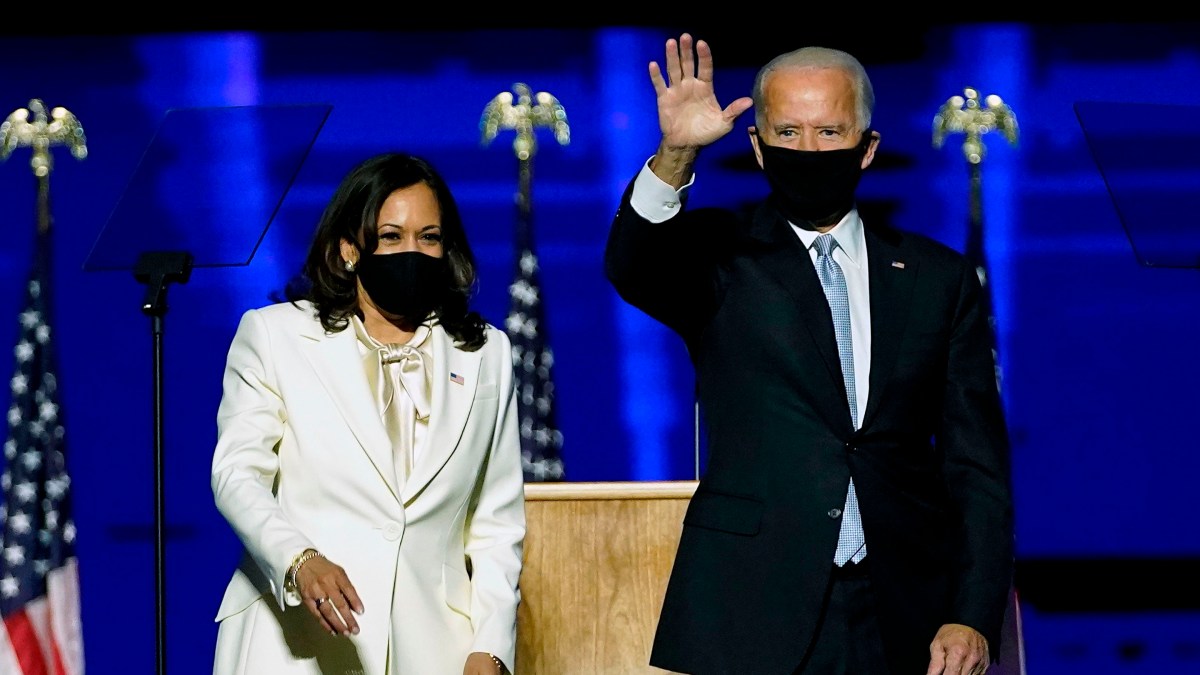 What might be President-Elect Joe Biden’s early moves to help households get through the economic turmoil of the pandemic?

Felicia Wong is a member of the Biden transition advisory board, but spoke with “Marketplace Morning Report” host David Brancaccio on Monday morning from her perspective as the president and CEO of the Roosevelt Institute, a nonprofit, liberal-leaning think tank. The following is an edited transcript of their conversation.

Felicia Wong: Right away this week, the Biden team is going to name a pandemic task force. And interestingly, that’ll be, of course, about public health. But it’ll also have a lot of elements for economic strengthening. The Biden team wants to make sure that we can produce masks and PPE domestically. There’s going to be a fund for state and local governments to prevent budget shortfalls, to help teachers, to help first responders, to keep those people employed even in an economic crisis. They’re talking about an emergency funding package for schools and small businesses so they can adapt to COVID. These are very immediate things that I think that task force will tackle right away.

Working with a Senate controlled by Republicans

David Brancaccio: But some of this has to be in cooperation — at least during the transition period — with the existing Senate run by Republicans. So can much really get done on spending stuff before the new Congress comes in?

Wong: Good question. I do think you’re going to see real efforts, very quickly, including before inauguration, on a kind of relief plan or a stimulus package. And I think that will include all of the things I just mentioned. It will also include stronger unemployment insurance. It’ll include an improved mechanism for helping small businesses, maybe through rent relief, maybe through more funding to keep workers on payroll. And I think it will also include funding for state governments and for city governments, which of course are under such crisis. That crisis, that economic crisis, is only going to get worse as the winter wears on.

Now, whether Republicans are going to come through and actually do this with Democrats is an important political question. But I think they are definitely incentivized to do that now that they know who is going to be in charge in Washington. And you’re going to see a lot of red state governors wanting that funding in addition, of course, to blue state governors.

New COVID-19 cases and deaths in the U.S. are on the rise. How are Americans reacting?

Johns Hopkins University reports the seven-day average of new cases hit 68,767 on Sunday  — a record — eclipsing the previous record hit in late July during the second, summer wave of infection. A funny thing is happening with consumers though: Even as COVID-19 cases rise, Americans don’t appear to be shying away from stepping indoors to shop or eat or exercise. Morning Consult asked consumers how comfortable they feel going out to eat, to the shopping mall or on a vacation. And their willingness has been rising. Surveys find consumers’ attitudes vary by age and income, and by political affiliation, said Chris Jackson, who heads up polling at Ipsos.

How many people are flying? Has traveled picked up?

Flying is starting to recover to levels the airline industry hasn’t seen in months. The Transportation Security Administration announced on Oct. 19 that it’s screened more than 1 million passengers on a single day — its highest number since March 17. The TSA also screened more than 6 million passengers last week, its highest weekly volume since the start of the COVID-19 pandemic. While travel is improving, the TSA announcement comes amid warnings that the U.S. is in the third wave of the coronavirus. There are now more than 8 million cases in the country, with more than 219,000 deaths.

How are Americans feeling about their finances?

Nearly half of all Americans would have trouble paying for an unexpected $250 bill and a third of Americans have less income than before the pandemic, according to the latest results of our Marketplace-Edison Poll. Also, 6 in 10 Americans think that race has at least some impact on an individual’s long-term financial situation, but Black respondents are much more likely to think that race has a big impact on a person’s long-term financial situation than white or Hispanic/Latinx respondents.

Find the rest of the poll results here, which cover how Americans have been faring financially about six months into the pandemic, race and equity within the workplace and some of the key issues Trump and Biden supporters are concerned about.

Australians stuck overseas ‘abandoned’ by their own country – BBC News

Australia became one of the first nations to close its borders in March 2020. Only returning nationals and residents were allowed in. Some exemptions...
Read more
USA

The cost of speaking up against China – BBC News

Some of those who spoke to the BBC - from the US, UK, Australia, Norway, the Netherlands, Finland, Germany, and Turkey - provided screenshots...
Read more

ROCHESTER, N.Y. — A small business operated by a Hope College graduate is a semifinalist in the 2021 Virtual Small Biz Challenge from the UPS...
Read more
Cryptocurrencies

India is reportedly moving forward with a sweeping ban on cryptocurrencies. According to Reuters, the country’s legislature will introduce a bill that criminalizes trading,...
Read more
Stock

Stocks rose Thursday as traders digested a key print on inflation, which showed consumer prices rose faster than expected as demand surged during the...
Read more

Concrete proposals for a European super league are being discussed by top clubs including Manchester United and Liverpool with more seriousness because of the...
Read more
Economy

News broke this morning that real GDP grew at an annualized rate of 33.1% in the third quarter...
Read more
Economy

Wallabies back Matt Giteau to continue career in the USA – SARugbymag

Wallabies centurion Matt Giteau has become the latest high-profile name to join the USA’s Major League after signing for the Los Angeles Giltinis. The...
Read more