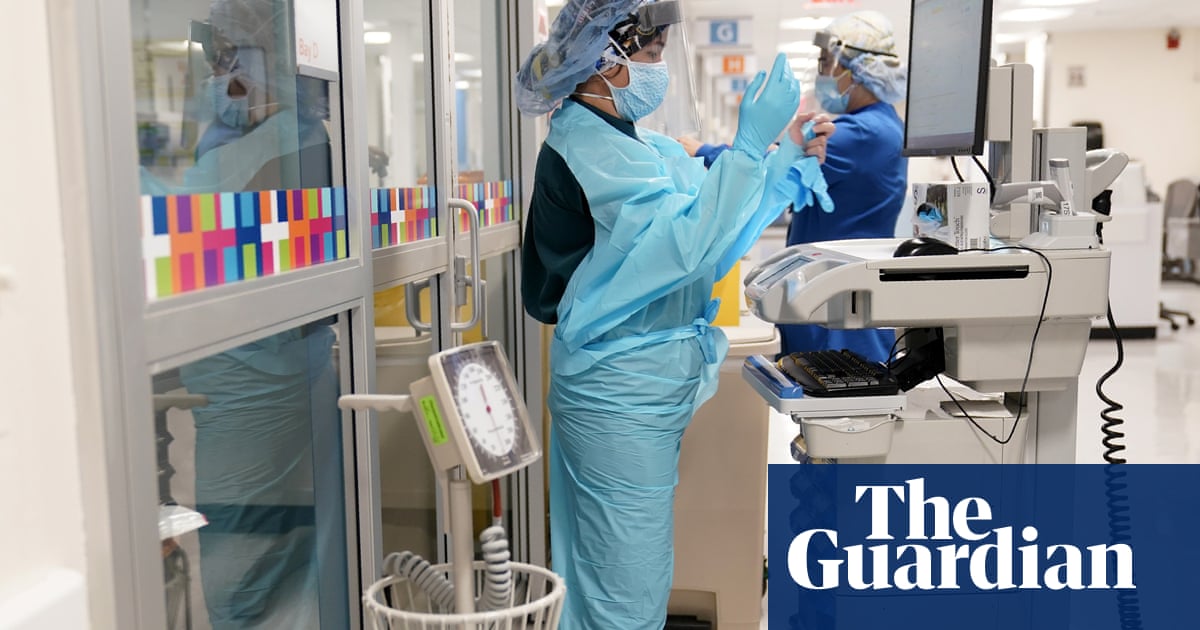 The number of US coronavirus cases passed 10m on Monday as the virus raged across many parts of the nation.

The numbers were released as Joe Biden named the members of his own Covid taskforce – and it was reported that Ben Carson, the housing and urban development secretary, had become the latest senior Trump aide to test positive for the virus.

There was also promising news about the quest for a vaccine.

Some counts had previously put the US caseload over 10m but according to data from Johns Hopkins University in Maryland, 105,927 new cases on Sunday brought the total to 9,964,540 earlier on Monday and the total did not pass the 10m mark until the afternoon.

The daily number was down from record highs on Friday and Saturday. The death toll stood at 237,409. But with cases holding at more than 100,000 a day, Dr Anthony Fauci’s infamous warning earlier this month still rang true.

“We’re in for a whole lot of hurt,” Fauci, the director of the National Institute of Allergy and Infectious Diseases, told the Washington Post. “It’s not a good situation. All the stars are aligned in the wrong place as you go into the fall and winter season, with people congregating at home indoors. You could not possibly be positioned more poorly.”

Deaths are expected to rise. “The next two months are going to be rough, difficult ones,” Dr Albert Ko, an infectious disease specialist at the Yale School of Public Health, told the Associated Press. “We could see another 100,000 deaths by January.”

Carson reportedly experienced symptoms and was tested at Walter Reed hospital, outside Washington DC, though he did not remain there for care. According to Bloomberg News, other attendees at a White House election night watch party last Tuesday included the attorney general, Bill Barr, the treasury secretary, Steven Mnuchin, and the health secretary, Alex Azar.

On Monday morning, Pfizer and BioNTech announced that interim results in large-scale trials showed their Covid-19 vaccine was more than 90% effective. The companies touted “a great day for science and humanity”.

Biden heralded the scientists’ work. From Delaware, where transition planning continued, the president-elect said: “It is also important to understand that the end of the battle against Covid-19 is still months away.”

Even if the vaccine were to be approved by late November, as industry leaders predicted, Biden said “it will be many more months before there is widespread vaccination in this country.”

He also said that for now, “a mask remains a more potent weapon against the virus than the vaccine” and emphasized precautions such as face coverings, social distancing and contact tracing.

“We were never part of the Warp Speed,” said Kathrin Jansen, the head of vaccine research and development. “We have never taken any money from the US government, or from anyone.”

States across the US are struggling. On Sunday the Republican governor of Utah, Gary Herbert, declared a new state of emergency.

“Due to the alarming rate of Covid infections within our state, tonight I issued a new state of emergency with several critical changes to our response,” Herbert said. “These changes are not shutting down our economy, but are absolutely necessary to save lives and hospital capacity.”

The governor said the state was being placed under a mask mandate until further notice and casual social gatherings were being limited to household-only for the next two weeks. All extracurricular activities were being put on hold, he said.

In California, governor Gavin Newsom warned on Monday that the state’s positivity rate was on the rise, after a period of relative success in containing the virus. He also said some counties could move “backward” into more restrictive rules for reopening.

Fauci and other experts have described how the work of the White House coronavirus taskforce has stuttered and dwindled. On Sunday, the day after his victory over Trump was called, Biden made his first two appointments to his own panel of Covid advisers.

Andrew Cuomo, the governor of New York, said he believed “the political pressure of denying Covid is gone” now Trump had been defeated. Cuomo clashed with Trump in the early days of the pandemic, when New York was hit hard.

“I think you’ll see scientists speak with an unmuzzled voice now,” the Democrat told ABC’s This Week, on Sunday. “And I think the numbers are going to go up, and Americans are going to get how serious this is.”

One leading Democrat expected to be named to Biden’s cabinet said there was “a sense of urgency throughout” the president-elect’s team.

“We know that every day is bringing more loss, more pain and more danger to the American people,” Pete Buttigieg, a former mayor of South Bend, Indiana, and candidate for the Democratic nomination, told Fox News Sunday. “And it’s why he’s not waiting until he’s taking office to begin immediately assembling people who have the right kind of expertise and planning to actually listen to them.”

This woman has the largest mouth in the world, according to Guinness – CNN

The latest in the NBA playoffs, the NFL's decision to end the practice of "race norming," and an upcoming boxing match between former...
Read more
Stock

It has been a big year for cryptocurrency. Bitcoin is worth six times what it was 12 months ago, and the joke currency dogecoin has seen...
Read more

‘The stock market is the only option to grow your money’: Why new investors bought stock during the pandemic – Yahoo Finance

The ability to put just a few extra bucks into stocks. A pandemic panic that drove stock prices way down for many companies that...
Read more
Business

How Did Business’s Role in Society Change in 2020? – Harvard Business Review

The year 2020 was incredibly rough, but with one big bright spot at the end. A once-in-a-century global pandemic — an unfathomable tragedy — devastated lives...
Read more
USA

Wiskus to Compete for Team USA in FIG Friendship and Solidarity Competition – GopherSports.com

Reports: European qualification might be the only thing that can save Mourinho’s job – Cartilage Free Captain

Tottenham Hotspur was absolutely radio silent on Friday, which shouldn’t be surprising to anyone. Of course, the club was traveling back from Croatia after...
Read more

From Bitcoin to Dogecoin: What’s Driving Cryptocurrencies’ Rise and the Challenges Ahead – The Wall Street Journal

Cryptocurrencies such as bitcoin, ether and dogecoin have surged to highs that few investors would have predicted a year ago. The furious run has...
Read more
European Premier League

Arsenal's best chance of qualifying for next season's Champions League is almost certainly through winning the Europa League but with 27 league...
Read more
Business