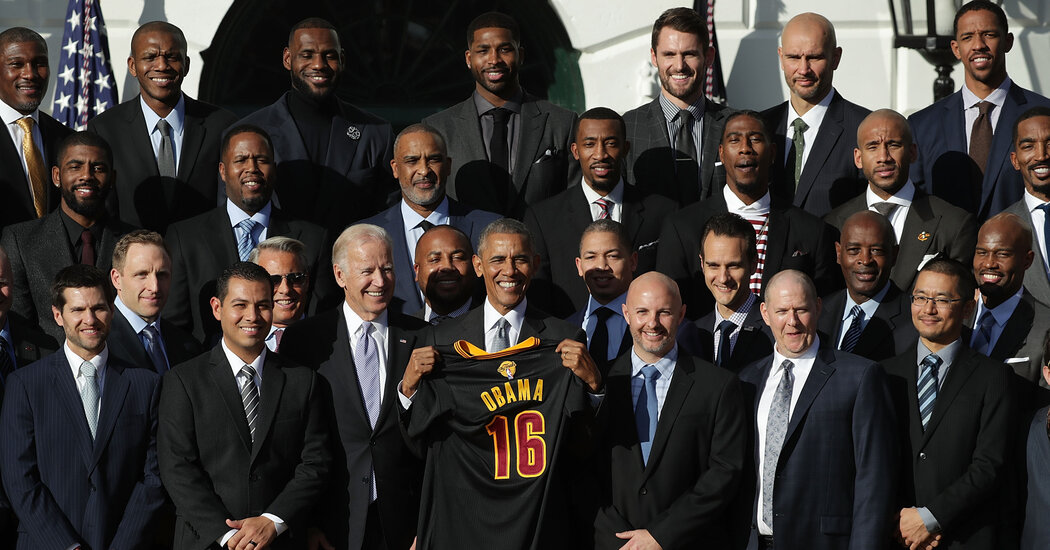 Awe and tension filled the air on that sunny afternoon in the Rose Garden four years ago this week. I could feel it, and so could everyone else on hand: The sense of celebration mixed with a gnawing worry for the future.

There stood LeBron James, regal in his double-breasted suit but forcing a smile, surrounded by the rest of his team, the N.B.A. champion Cleveland Cavaliers. In front of them, President Barack Obama held court, bestowing kudos and lightening the mood by cracking wise.

“Give it up to the world champion Cleveland Cavaliers,” Obama said, nodding to the fact that the Cavaliers’ win over the Golden State Warriors that spring was the first major sports championship for the city of Cleveland since 1964. “That’s right, I said ‘world champion’ and ‘Cleveland’ in the same sentence. That’s what we’re talking about when we talk about hope and change.”

It was Nov. 10, 2016. I’ll never forget it. Two days earlier, Donald J. Trump had defeated Hillary Clinton to win the presidency. I’d been following the Cavaliers closely then, city to city, game to game, working on a story about Cleveland’s then head coach, Tyronn Lue.

That’s how I found myself in the Rose Garden, on hand to witness a scene woven into the fabric of American sporting life: the honoring of a championship team by the nation’s chief executive.

Everything about that day felt surreal. In the morning, Obama had welcomed Trump to the White House for a short briefing. To watch Obama put aside the seriousness of that moment and then commune with James and the Cavaliers was to watch a president bathe in a sort of healing balm.

That was not a surprise. Obama’s bond with athletes, particularly with Black athletes like the ones who made up the bulk of the Cavaliers’ roster, was a hallmark of his presidency.

But it was more than that. The connection between presidents and athletes had long been cozy, defined by a sort of low-stakes ease. Nothing captured that relationship like Rose Garden ceremonies, which came to regularly honor teams from a wide variety of sports.

True, they were publicity stunts. But they also held meaning. For decades, such ceremonies had provided a chance for people of all political persuasions to set aside differences and bond over the succor of success and the history and power of the presidency.

But by 2016 the ease of such visits had become complicated, even for Obama. More, Trump was on the horizon. He had already started picking fights with athletes, leaning into the backlash against Colin Kaepernick, then the San Francisco 49ers quarterback who had just started his protests against police brutality and the mistreatment of Black people by kneeling during the national anthem.

As I watched Obama and Vice President Joseph R. Biden Jr. say goodbye to the Cavaliers, I remember being struck by the sense that the easy communion between athletes and the presidency was about to change in a way that might prove unalterable.

Reagan reveled in the joy of such moments. He hammed it up with the national champion Georgetown men’s basketball team, threw a pass to a wide receiver for Washington’s Super Bowl-winning football team and received a popcorn drenching from the New York Giants’ Harry Carson.

But as time passed and new presidents continued the tradition, the nation’s growing political divide crept in.

But whole teams turning down the White House?

Sure enough, angered by his policies and rhetoric, emboldened by the evolution in athlete activism, not a single N.B.A. championship winner visited Trump these last four years.

In 2017, after the Warriors won the title and the league and the White House were discussing a visit, Stephen Curry said he would not attend — prompting the president to bark back over Twitter: “Going to the White House is considered a great honor for a championship team. Stephen Curry is hesitating. Invitation is withdrawn.”

Soon, James shot back with a tweet in Curry’s defense. He called the president a “bum,” and added: “Going to the White House was a great honor until you showed up!”

Some teams did visit. But others skipped it, were not invited or had invitations rescinded when it became clear few players would attend. Since 2016, none of the W.N.B.A. champions have gone to the White House. Same for North Carolina’s men’s N.C.A.A. championship basketball team, South Carolina’s title-winning women’s basketball team and the 2018 Super Bowl champion Philadelphia Eagles. I could go on.

Trump was left with narrowing opportunities to play host. He feted the Alabama and Clemson football teams, and a few champions from mostly white, conservative-leaning sports like baseball and hockey. For a while, he could count on the New England Patriots, whose owner, Robert K. Kraft, and coach, Bill Belichick, are Trump supporters. After winning the Super Bowl at the end of the 2016 season, however, nearly half of the players steered clear of the White House. And when New England was victorious again two years later, the team didn’t visit at all.

So much for the days of easy communion.

It has been four hard years since that day of awe and tension in the White House. Will James, now having led the Los Angeles Lakers to the 2020 title, return with his new team to visit President Biden? Bank on it. Expect the W.N.B.A.’s Seattle Storm, who conquered their league title this year and endorsed Biden, to do the same, along with teams that didn’t back a candidate but focused instead on boosting voter registration and turnout.

But with large swaths of the country arguing, without evidence, that last week’s election was stolen, will conservative champions or players begin turning down visits to the Biden White House? That’s not hard to imagine.

It is impossible to say what will happen in future presidencies, with future generations of athletes. But for now, sadly, we can assume that the Rose Garden celebration of champions, once a chance to cast aside differences and revel together in greatness, will limp forward, scarred and fractured, same as America.

Now that the election is over, both parties should come together to help the American people recover from the damage wrought by the Covid-19...
Read more
Cryptocurrencies

The total value of all cryptocurrencies passed $1 trillion Wednesday for the first time ever, per CoinGecko‘s index of 6,124 assets. At its prior...
Read more

Lawmakers on Capitol Hill will introduce President Joe Biden's immigration plan in Congress on Thursday, including a proposal for a path to citizenship for roughly 11...
Read more
World News

"I have been fully briefed and everything is well under control. Russia, Russia, Russia is the priority chant when anything happens because Lamestream is,...
Read more

If you’re a creative, being in business for yourself can feel like a quagmire. Analytics, financials, sales, and the like, can feel like a...
Read more
World News

Habib hasn't heard from his brother for two years, since he was taken captive by Kurdish forces. But he knows that Bekim's wife and...
Read more

INDIANAPOLIS (WISH) – Here’s a look at Wednesday’s business headlines. COVID habits In 2021, consumers will be demanding, anxious and creative in dealing with...
Read more
Economy

The congressional agreement on Sunday on another dose of aid to fuel the slowing economic recovery has probably spared millions of Americans from a...
Read more
USA