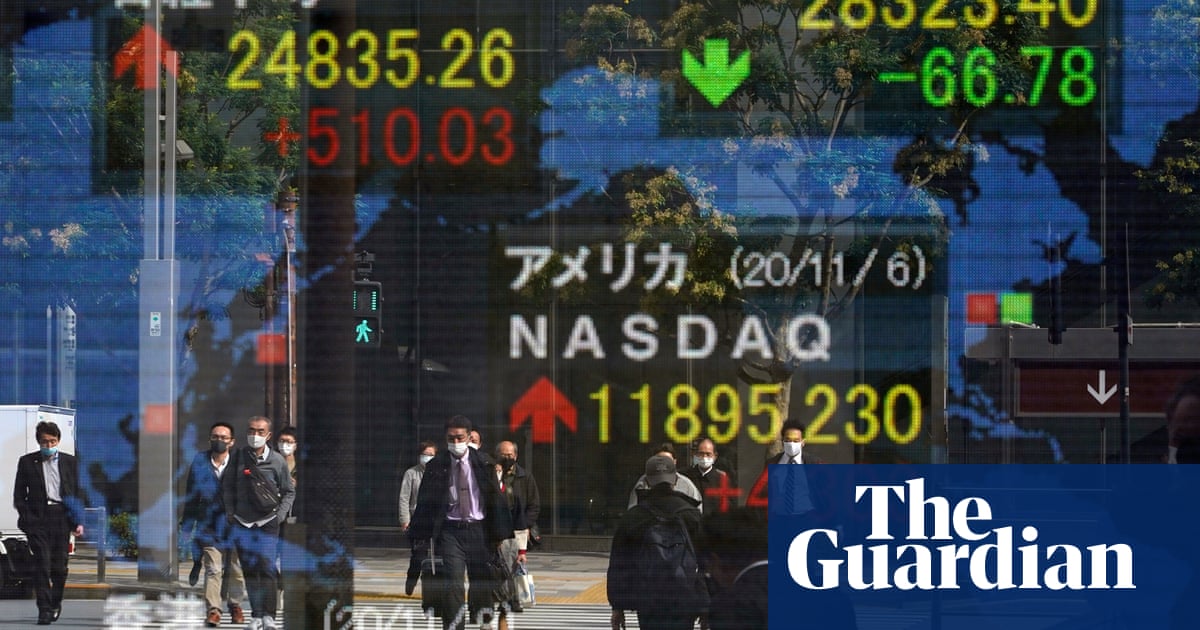 Financial markets around the world have received a marked boost in the wake of Joe Biden’s victory in the US presidential election, with Japanese shares hitting their highest level for nearly three decades and oil prices also climbing.

Stock prices in Europe and New York were also expected to rise sharply on Monday after the president-elect pledged to try to bring unity to the US after four tumultuous years under the Trump administration.

The Nikkei index in Tokyo led the way with a rise of 2.12% by the close as traders in Asia Pacific got the first chance to give their verdict on the Biden victory declared over the weekend.

Futures trading suggested the FTSE100 will soar 1.3% at the opening bell on Monday, while the S&P500 is set to gain 1.5% and the tech-heavy Nasdaq futures rallied over 2%.

Investors appeared to be betting that Biden will most probably find himself without control over the Senate and therefore unable to push through any meaningful fiscal stimulus, in turn obliging the US Federal Reserve to continue pumping cheap money into the economy and keep borrowing costs at their historically low levels.

“While lots of attention was given to Trump vs Biden, markets have reacted strongly to the (likely) split congress, which means more confidence that interest rates will be lower for longer,” said Dave Wang, portfolio manager at Nuveen Capital in Singapore.

Damien Klassen, of Nucleus Wealth in Melbourne, said the market’s reaction had still been a “little bit strange” given the prospect that the new president would be hamstrung

And despite a rush of money into the markets because of latent demand, Klassen believes the outlook for the global economy was still troubling because it was relying so much on government stimulus.

“The fundamentals still look terrible,” he said. “And it’s worse given the virus is ripping through America and Europe. Hopsitalisations are really ticking up and when people start dying in corridors that’s when ordinary people stop doing stuff.”

“So the fundamentals don’t look good and how long can the markets ignore that?”

Matt Sherwood of Australian fund manager Perpetual was also sceptical, arguing that Biden’s victory did not necessarily warrant changing course on his investments.

“In the end, we think the US economy is still fairly fragile and growth’s slowing down,” Sherwood said.

Although some analysts believed that a multi-trillion dollar fiscal stimulus plan focused on much-need infrastructure projects in the US was still possible despite a divided government, the spotlight would once again switch to the Fed.

As a result, the US dollar has weakened in recent days while growth proxies such as the Australian dollar have rallied with the Biden presidency seen less likely to be confrontational on trade. The Aussie was up 0.2%, having jumped 3.3% last week and the pound rose 0.3% to $1.32.

The US dollar index measured against a basket of leading currencies was down slightly at 92.19. In May it was 10 points higher.

Investor focus will also be on sterling and the euro this week with UK-EU trade negotiations coming to a head with the EU summit on 15 November.

Later in the day, the Bank of England chief economist will give a speech on “The economic impact of coronavirus and long term implications for the UK”.

Leaders of the world's 20 biggest economies continued to discuss how to distribute vaccines, drugs and tests around the world on Sunday, so that...
Read more

Getty Images It's derby weekend in Europe with Madrid and Manchester awaiting the resumption of hostility between their two best and...
Read more
Cryptocurrencies

Bitcoin: Nigeria bites back against cryptocurrency trading – Mail and Guardian

This story originally appeared in The Continent, the pan-African weekly newspaper designed to be read and shared on WhatsApp. Subscribe here. Bitcoin. The...
Read more
Stock

Stimulus checks still boost the economy, even if the money goes into savings or bill paying, experts say – NBC News

Can stimulus checks that go directly into savings accounts or to pay down debt still boost the economy? That is one of the key...
Read more
Economy

NBAMILWAUKEE (AP) —Giannis Antetokounmpo ended one of the greatest NBA Finals ever with 50 points — and a championship Milwaukee waited 50 years to...
Read more
Business

Flippa, an online marketplace to buy and sell online businesses and digital assets, announced its first venture-backed round, an $11 million Series A, as...
Read more
Economy

REUTERS/Brendan McDermid Paul Krugman expects the US economic recovery from the pandemic to be "much faster and continue much longer than many...
Read more