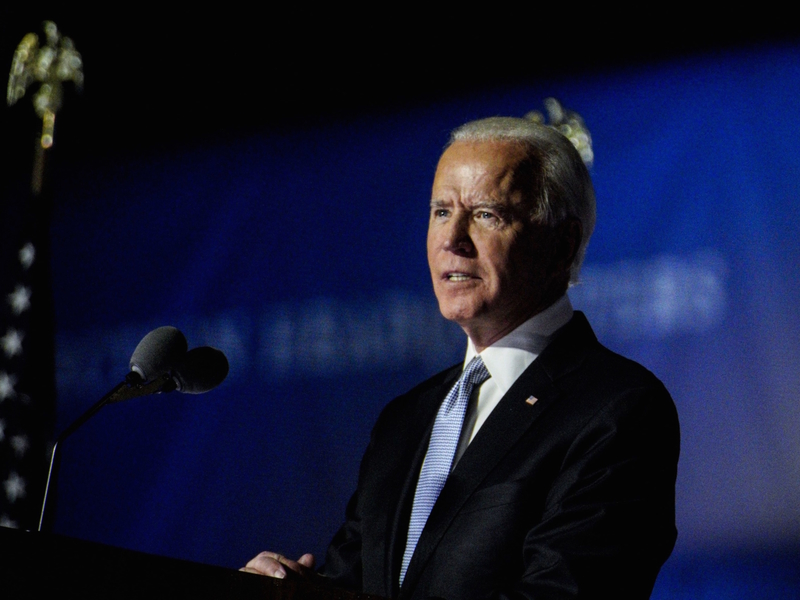 Joe Biden has been elected to be the next President of the United States. Now he’ll have to get creative.

When the President-elect takes office, he’ll confront the country’s two most acute challenges: an  ongoing Covid-19 pandemic and the economic damage it’s wrought. But he’ll have an uphill battle to enact the sort of bold policy agenda that many supporters were hoping for.

Barring a January surprise in Georgia’s runoff election, Republicans are likely to retain control of the Senate, denying Biden the unified control of government that his predecessors enjoyed when they came into office.  With traditional relief and stimulus measures limited by opposition party intransigence, Biden might still be able to pass policies designed to resuscitate the stricken service sector directly.

The U.S. economy has bounced rapidly back since April, but only partially. Employment has only recovered about halfway to where it was before Covid-19 struck, giving it the shape of a reverse square-root sign:

Lower-wage employees, who tend to work at the local services businesses most deeply impacted by the virus, are suffering more.

The economy is being afflicted by two simultaneous maladies. The first is continued fear of the virus, now in the middle of a devastating third wave. Fear, more than lockdowns, has kept Americans shut inside their homes, reluctant to take the risk of going out to shop or eat. That in turn gives rise to the second problem of decreased demand, which filters through the entire economy.

Fear of the virus will eventually be reduced by vaccines, which may become available in early 2021. A national program of testing and contact tracing — which President Donald Trump long resisted — would also help speed Covid-19 on its way, and should be a priority for the incoming administration. But even when the virus is gone, the economy is likely to remain depressed for awhile, as the overhang of unemployment works its way out of the system.

Bold relief measures, of the type that sustained Americans through the pandemic’s dark early days, probably won’t be forthcoming given the GOP Senate’s inevitable turn towards austerity. The same is true of traditional fiscal stimulus, such as a burst of infrastructure spending, that might help boost demand back to normal levels. But there might be a chance for more targeted measures to help the sectors of the economy that Covid-19 has hurt the most — local services.

Restaurants, shops, and other establishments that cater in person to customers have gone bust in large numbers. After the threat of the virus has passed, the U.S. government might try to resuscitate local economies by subsidizing new shops to fill the empty storefronts that now dot America’s urban landscape. Some of these new establishments would be run by the same owners whose businesses went under during the pandemic, while others would be run by enterprising newcomers. But all would be able to draw on the local pool of unemployed, most of whom were working in these same types of businesses in 2019.

Subsidizing new local businesses would accomplish several goals at once. It would put people back to work at jobs they know how to do, and start pumping demand through the ecosystems of local economies. It would help prevent cities’ commercial retail space from being riddled with unsightly boarded-up vacancies — a blight that hurts viable businesses next door. And it would help sustain and preserve the small business class.

This last aspect might make local business formation subsidies attractive to Republicans in the Senate; small businesspeople are a reliable Republican constituency. Additionally, this policy would be highly targeted; the subsidies could last only until a town’s existing commercial vacancies had been mostly filled, limiting the cost of the program and avoiding the appearance of handing out money at random.

Strict free-market adherents might worry that this plan would delay or prevent needed transformation in the U.S.’s industrial mix. The pandemic has shifted demand from local services to e-commerce; people are watching Netflix instead of going to movie theaters, and ordering things off of Amazon instead of buying them in stores. Some will question whether reversing that shift should be an economic priority.

But the benefit of quickly and cheaply resuscitating local U.S. economies far outweighs the danger of slightly delaying the evolution to a more online future. In fact, local business formation subsidies will simply accelerate a move that’s already in place; new business filings have been above trend since August, as entrepreneurs take advantage of cheap rents and labor. The local economy is restoring itself already — it could just use a push to get the job done faster.

Noah Smith is a Bloomberg Opinion columnist. He was an assistant professor of finance at Stony Brook University, and he blogs at Noahpinion.

Cryptocurrency Is Not Necessarily the Future – BloombergQuint

Alternatively, consider crypto assets, such as Bitcoin or ether, which are not pegged to major national currencies. They are useful hedges and speculation vehicles,...
Read more
Stock

The English Premier League is back on the box this weekend, with a whirlwind of fixtures straight off the back of the March international...
Read more

What Is the Next Big Cryptocurrency To Explode in 2021? – GOBankingRates

What Is the Next Big Cryptocurrency To Explode in 2021? | GOBankingRates
Read more
Cryptocurrencies

The SEC Is Taking a Major Step Toward Regulating Cryptocurrencies – Slate

It has been more than a decade since Bitcoin set the stage for the popularization of new of cryptocurrencies and blockchain technologies. But as...
Read more
USA

New CDC data found the US birth rate fell by 4% in 2020, the sharpest decline in nearly 50 years. Experts are worried...
Read more
Stock

As the pandemic drags on, retailers like Amazon, Walmart and Target are raking in digital sales, while thousands of small businesses struggle to keep...
Read more

Scudamore (left) stepped down from his role at the Premier League at the end of 2018There must be consequences for the six English clubs...
Read more
Stock