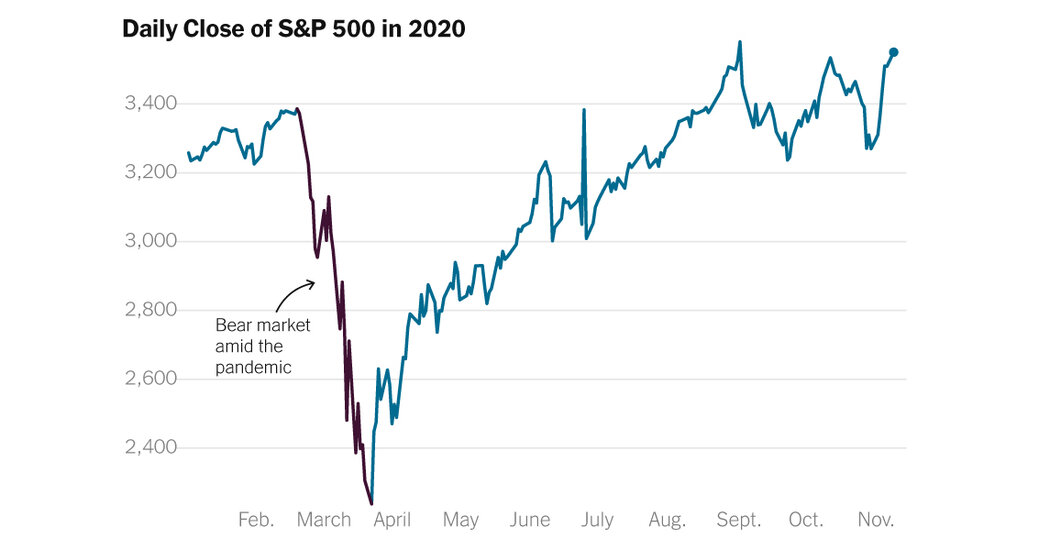 Nothing drags down a market like uncertainty. So on Monday, as clarity emerged around two of the year’s most pressing concerns — the presidential election and the coronavirus — investors let out the equivalent of a street cheer and rushed to buy stocks, placing bullish bets on a return to normalcy.

The S&P 500 stock index soared after Pfizer announced positive results from its early Covid-19 vaccine trials. The news came two days after Joseph R. Biden Jr. was declared the president-elect — putting to rest for now the specter of chaos and political unrest that many investors had feared would follow a loss by President Trump.

Markets had already been on the upswing, as investors warmed to the possibility last week that Mr. Biden would win the presidency and that Republicans could maintain their grip on the Senate. Many investors view a divided government as a positive development because it would rein in Democratic priorities such as higher taxes and major regulatory overhauls, which some consider a potential risk to stock prices. That reasoning was partly behind the S&P 500’s 7.3 percent climb last week — its best weekly performance since April.

“There’s a palpable sense of relief in the market today, and that is kind of the dominant feeling,” said Kate Moore, a strategist on BlackRock’s Global Allocation Fund. “Relief that we’ve had an orderly election. Relief that the vaccine data is stronger, at least from Pfizer, than many anticipated.”

The momentum gathered pace when, shortly before 7 a.m. on Monday, Pfizer and its German partner, BioNTech, said their Covid-19 vaccine candidate had demonstrated 90 percent efficacy in clinical trials. While analysts had long assumed a vaccine would emerge from the many candidates currently in trials, the efficacy rate was significantly higher than what many were expecting.

The higher rate, said Ajay Rajadhyaksha, a macroeconomic analyst with Barclays in New York, was a “significant positive surprise” that “increases the odds of a quicker return to normalcy.”

The S&P 500 soared nearly 4 percent after trading opened on Wall Street before losing steam late in the day and closing 1.2 percent higher. The market gave up one percentage point of gains in the final half-hour of trading after the Senate majority leader, Mitch McConnell, said Mr. Trump was “100 percent within his rights” to challenge the outcome of the election — a reminder to investors that political uncertainty could linger.

Major markets across Asia and Europe also posted significant gains. Even before the vaccine news was announced, Japan’s Nikkei 225 was up more than 2 percent. China’s CSI 300 was up nearly 2 percent.

Markets in Europe — where a resurgence of Covid cases has prompted renewed lockdowns in Germany, France and Britain — romped higher once Pfizer disclosed its results. Britain’s FTSE-100 was up nearly 5 percent, as was Germany’s DAX. France’s CAC-40 rose 7.6 percent.

With little changed on the ground, the market’s exuberance can be confounding. After all, the United States is still setting records for new coronavirus cases, the economy is still in the grip of a recession, and it could be months before a vaccine is widely available. But investing by its nature looks to the future, and on Monday investors were basing their buying and selling on their expectations of what the world could look like in a few months, rather than what it looks like today.

“Any investment or stock that does well when people can gather together in person has meaningfully outperformed today,” Ms. Moore of BlackRock said.

“If this vaccine data is legitimate, we could see a return to office work,” said Randy Watts, chief investment officer for O’Neil Global Advisors, a financial advisory firm.

On the flip side, investors dumped shares of the companies that have come to define the pandemic economy. Peloton plunged more than 20 percent, Zoom and Etsy tumbled 17 percent, and Shopify fell nearly 14 percent.

Prices for government bonds — where investors traditionally park funds during times of uncertainty — dropped sharply, pushing yields, which move in the opposite direction, to some of the highest sustained levels in months. The yield on the 10-year Treasury note rose to 0.95 percent on the day, its highest level since the pandemic struck this year. The rise in yields reflects growing optimism among investors for economic growth.

Benchmark American crude oil prices were catapulted 8.5 percent higher to $40.29 a barrel on renewed optimism about global demand in a recovery. The energy sector was the best-performing part of the S&P 500, rising more than 14 percent.

On Wall Street, trading desks buzzed as large investors urgently sought to make trades. By around 11 a.m., the brokerage firm Liquidnet — which specializes in executing trades of large blocks of shares for institutional investors — had already seen roughly an entire day’s worth of trading activity, said Simon Maughan, a top trader at Liquidnet.

Despite the outsize market moves on Monday, several analysts suggested that there were reasons for investors to be cautious. Stock prices have staged an enormous turnaround, rising nearly 9 percent in six trading sessions.

“These are the types of moves that tend to run out of gas if the underlying data doesn’t quickly confirm the enthusiasm,” said Lisa Shalett, chief investment officer at Morgan Stanley Wealth Management.

In the near term, the data on the growth of the virus in the United States is clearly moving in the wrong direction. Case counts have hit record highs in recent days, and continue to run at more than 100,000 new infections a day. Several analysts say the rampant spread of the virus could prompt a return of restrictions that could hurt the American economy over the coming months.

Despite Pfizer’s encouraging update, there is considerable uncertainty about the path forward for the vaccine. Independent scientists have warned against hyping early results without adequate long-term safety and efficacy data. It remains unclear how long the Pfizer vaccine’s protection might last against the virus. And even if the drug is approved, the production and distribution of hundreds of millions of doses will be daunting challenges.

“The difference between having a vaccination and having 330 million vaccinations is huge,” said Scott Clemons, chief investment strategist for private banking at Brown Brothers Harriman, an investment bank. “So you’ve still got the possibility of more economic weakness, maybe even the possibility of a double-dip recession until that vaccine is available.”

Ahead of Market: 12 things that will decide stock action on Monday – Economic Times

Economic growth will be better than expected thanks to the resilient services sector, Goldman says – CNBC

Teresa Nguyen, a respiratory therapist, goes over a patient’s charts inside a room for people with the coronavirus disease (COVID-19) at a hospital in...
Read more
Business

The Week in Business: Biden Gets Down to Business – The New York Times

All eyes are on President Biden right now. Here’s how his new policies will affect companies and households struggling to weather the pandemic economy...
Read more
Business

The United States will require air passengers traveling from the United Kingdom to provide a negative coronavirus test within 72 hours of departure, theCenters for Disease Control...
Read more
Stock

The coronavirus pandemic has taken a brutal toll on the U.S. economy. Job losses resulting from the health crisis wiped out years’ worth of...
Read more

It wasn't even a month ago that PayPal announced that it would let its customers use cryptocurrencies and hold them in their wallets, but...
Read more
Stock

Stocks jumped Monday as investors eyed the roll-out of the first coronavirus vaccines in the U.S. and anticipated that lawmakers in Washington would end...
Read more
Sports

Review of St. Pauli: Another Football Is Possible, by Carles Viñas and Natxo Parra. (Pluto Press, 2020). In...
Read more